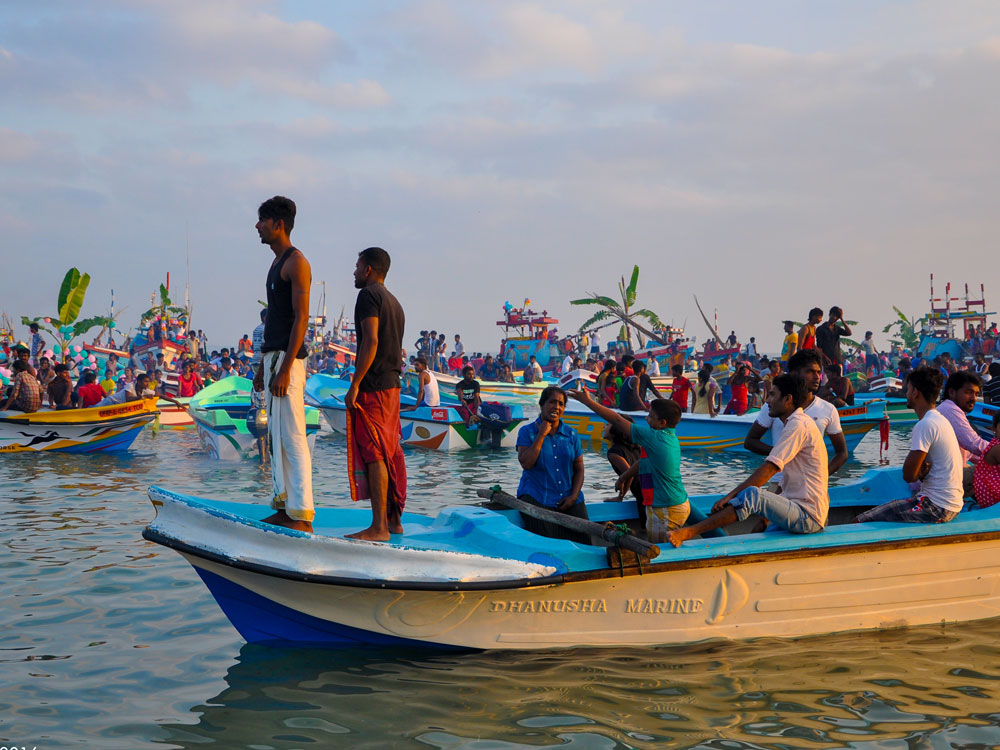 With a country as rich in culture and tradition as Sri Lanka, there are loads of reasons to celebrate. In fact, it is sometimes claimed that this small island has the highest number of festivals than any other country in the world. With more than 25 public holidays and four major religions of the world residing on the island, things grind to a halt with a disconcerting frequency in this small country.

Thai Pongal: Celebrated by the Hindu devotees on 14th of January, Thai Pongal is a harvest festival celebrated throughout Sri Lanka with much cheer and devotion. Colorful kolam is used to decorate the houses along with intricate drawings made with flour on the floor. Special prayer ceremonies and pujas are held in the temples and kovils to worship the sun God. After the prayers are over, do not forget to sample the customary Pongal meal that includes cashew nuts, jiggery, cardamom and raisins with the meal dedicated to the Sun God. Served on the banana leaves and prepared in a clay pot called Kollam, the meal is an important part of the festivities that is also shared with friends and neighbours.

Independence Day: Celebrated on 4th of February, Independence Day of Sri Lanka is celebrated to commemorate the political independence of the country from British rule on the same date in 1948. Celebrations are held all over the country along with flag hoisting, parades, dances and performances with the main celebration at the parliamentary grounds of Colombo in Sri Jayawardhanapura that is attended by all the main dignitaries and politicians of the country. The President raises the National flag followed by his televised speech that highlights the achievements of the country made during the past year as well as further highlighting the important issues that need to be taken care of in the coming year. The President also observes a two minute silence in the memory of the national heroes of the country followed by a great military parade that showcases the commitment, bravery and might of the navy, army and air force of the country. In addition to national celebrations, religious observances are also made all around the country for the peace and prosperity of the country, its people and its armed forces.

Maha Shivratri: Dedicated to Lord Shiva, Maha Shivratri is a grand Hindu festival celebrated on the 14th day of dark fortnight in the Phalgunaa month of Hindu lunar calendar. Also a public holiday in Sri Lanka, the festival involves poojas and prayer ceremonies in households and temples all around the country. Processions and Rathyatras are organized through the streets with images carried by the chariots so as to give the general public a view and blessings of Lord Shiva. Sewas or Hindu act of charities is performed to please Shiva and other great Hindu spirits.

Gangaramaya Navam Perahara: This famous parade of Colombo draws tourists from across the country and world. It includes dancers, elephants as well as musicians performing on the streets of Colombo through two nights on the full moon day of February. This pageant is planned by Gangaramay Temple every year with the visual spectacle of hundreds of beautifully decked elephants walking down the road in bright fineries. Initiated in 1979 by the temple, the festival is the embodiment of the fun, colour and excitement of the local fervour and traditions.

Good Friday: Observed primarily by the Christian community of Sri Lanka, Good Friday commemorates the crucifixion of Jesus Christ. Most of the Catholics treat the day as a fast day on which the faithful retain from having meat and have only a single meal during the entire day. Prayer services are held in churches all across the country in remembrance of the sacrifices made by Christ for his pupils.

Sinhalese and Tamil New Year: Generally known as Aluth Avuruddha in Sri Lanka, the New Year is celebrated in April by all Sinhalese and Tamil communities. The festival is a celebration of the passage of the sun god from Pisces to Aries. In addition, it is also a harvest thanksgiving festival celebrated by the villagers in a true Traditional style full of colour and extravagances. It is a time for friends and family when rituals are performed, new clothes are worn and tables are filled with sweets, boiled milk and traditional ricemilk. Traditional games are organized for the youth of the community along with playing of Raban padha which is a traditional drum played during the ceremonies.

Wesak: Celebrated on the full moon of the lunar Vesak month, Vesak is one of the most hallowed and religious festival of the Buddhists when they commemorate the birth, enlightenment and death of Buddha. The festival goes on for a whole week during which alcohol and fresh meat are prohibited and even abattoirs are closed. The main celebrations are held on the full moon day when the Buddhists start their day dressed in white on their way to the temple to observe sila. The day is spent meditating, sermon listening and reading religious texts while the night is crowded with devotees with devotees. The wesak week is a joyous occasion celebrated with striking and imaginative decorations involving paper lanterns of all shapes and sizes as well as thousands of little coconut oil lamps flickering throughout the island. However, if you really want to experience the scale of the festival, be in Colombo where the celebrations are unsurpassed. Enormous pandals with life size pictures of Buddha from his different facets of life are depicted with the streets illuminated with flashing electric bulbs. Another unmistakable feature of the festival are the danselas or the alms booth. These temporary booths are set by the roadside to provide free refreshments and food to pilgrims and sightseers. The country receives a massive influx of devotees and pilgrims throughout this week.

Esala Perhara: Famous as one of the most glamorous cultural processions of the world, Esala Perahara takes place on 10 consecutive nights in the historic city of Kandy. The first six nights are called Kumbal perahara while the last four nights are the more glamorous ones known as the Randoli Perahara. The final night of the processions, in fact, has over 100 elephants adorned in their finest costumes parading down the streets. This event is being celebrated annually since 3rd Century BC so as to allow the pilgrims to pay their respects and homage to the scared Tooth Relic Temple. The parade is a vivid spectacle full of colors and performances by instrument players and dancers from all over the island.

Vel: If you find Esala Perahara in Kandy exciting, you are sure to find Vel in Colombo equally exhilarating and colourful. This procession is by Hindus where their God of War carries his vel, the trident weapon, from Muthuvinayagam Swami Kovil in Pettah to Kathiresan in Bambalapitiya.

Madhu Festival: Also known as the “Feast of St Anne”, the Madhu Festival is celebrated by Catholics. It is said that the Madhu Church in Mannar district and the famous St Anne’s Church of Sri Lanka have miracle statues, thus acting like a center for pilgrimage for the Sri Lankan Christians. Every Year, thousands of devotees visit this pilgrimage to spend some time in prayer at the feet of their god while camping overnight outside the church. The place is historically famous for the healing power of its soil.

Diwali: Popularly considered as the start of the financial year for the Hindu business community, Diwali, also known as Deepawali, is a festival of lights. On this day, the goddess of wealth is welcomed in homes which are decorated with finest lights, beautiful intricate kolam designs and lit with numerous lamps. People wear new clothes, exchange gifts, poojas are performed and a visit to Hindu temples is considered necessary. This small island is illuminated with crystal sugar figures and includes various traditional aspects of the festival such as games, singing, fireworks, and dancing. However, the festival is a true collaboration of family feelings, including the tradition of large meals for the whole family.

Christmas: One of the highest trading months of Colombo, December is the month of celebrations for the Christians and general public alike. This includes New Year and Christmas, both the festivals which are celebrated with crackers and joyous sharing with poor. Churches all around the country hold mid night masses for the devotees while families gather together to celebrate with pomp and show. People wear new clothes and start their new year with resolutions and prayer meetings .

Set where you live, what language you speak and the currency you use. Learn more.